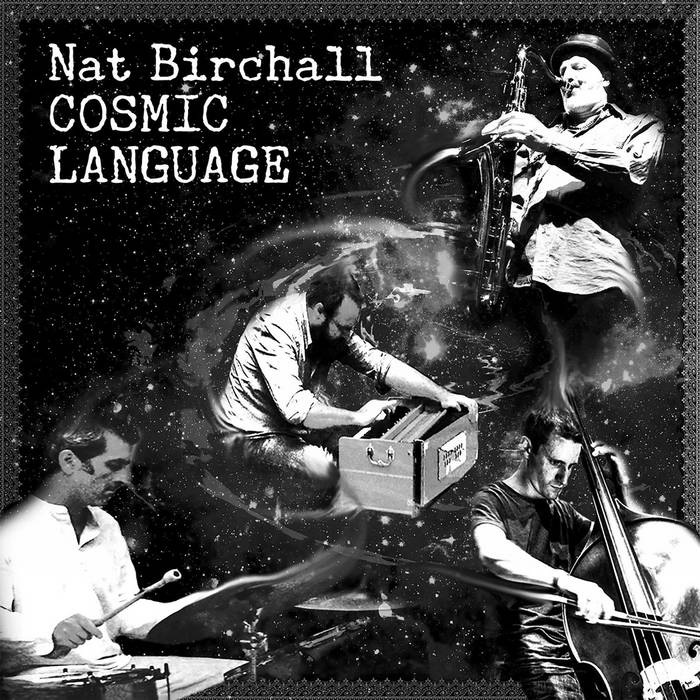 Yokrimi Deeply spiritual and meditativ.Nat gave his soul thru his horn, only a few can do that Favorite track: Man From Varanasi.

John Cratchley Carrier of the spiritual flame...a beautifully meditative album...Birchall is the genuine article...this will get played often and with much affection...life affirming positivism.

Cosmic Language sees the UK-based saxophonist, composer and arranger return to Jazzman Records with a cross-cultural approach: an exploration of the parallel musical paths of jazz and Indian ragas. Here he takes influence from spiritual jazz forebears such as Alice Coltrane and Yusef Lateef and introduces the Indian harmonium to his band, where it takes the place of the piano. Making new connections to realise his transcendental ambitions, it's a logical next step in making music as spiritual cleanser.

The idea for the album was spawned from a one-off performance at a meditation centre, the Maharishi Golden Dome in West Lancashire. Seeking to bring a band set-up that was fitting to the quiet-minded setting, Birchall brought the harmonium with him. A small pump organ, it's an instrument he'd been in possession of for many years but hadn't previously used in his music. Building on the spiritual context of that show, and the associations of that instrument, it led naturally to the musical approach undertaken on the album.

Both the album and the show which preceded it were recorded with the same tight-knit group of players which have featured on Birchall's previous albums. All members of the group are part of the same like minded circle of Manchester-oriented jazz musicians, sharing stages and acquaintances with the likes of Matthew Halsall (a longtime collaborator with Birchall) and GoGo Penguin.

Birchall has always channeled wide-ranging ideas into music that's simple to understand, and this album is no exception. Album opener 'Man From Varanasi' is an ode to Bismillah Khan, one of Birchall's heroes of Indian music who hailed from the northern Indian city named in the title. It also sees him taking cues from the Indian raga tradition which, as with most other traditional Indian music, is a foundation which underpinned Khan's music.

Crucially, the ragas tap into the idea of of music as a means of spiritual release. As Birchall explains, The whole act of making music is a spiritual experience. It's during performance and when playing music that I look for a kind of truth. It's with music where I find myself feel closest to attaining that 'enlightened' kind of feeling. On rare occasions I've actually felt as though I was listening to the music being played rather than being involved in making it, almost like an out-of-body experience.

This natural feeling comes from Birchall's attitude toward jazz music. He sees it as an essential part of day-to-day life: instead of brightly-lit, occasional entertainment in lugubrious concert halls, he considers it an everyday, vital source of inspiration. At a moment where jazz-influenced music is undergoing creative renewal and wider appreciation, it's an important perspective that's found resonance elsewhere. His experiences and the world around him are filtered through his music, and he looks to have his music – be it live or on record – absorbed in the same quotidian way. To me, it's an integral part of society, an everyday thing, he says. You should hear the music every day.

Bandcamp Daily  your guide to the world of Bandcamp

Serena Cherry debuts her black metal project, plus a Pick from the Crypt block from Svalbard