The Storyteller - A Musical Tribute to Yusef Lateef

by The Nat Birchall Quartet 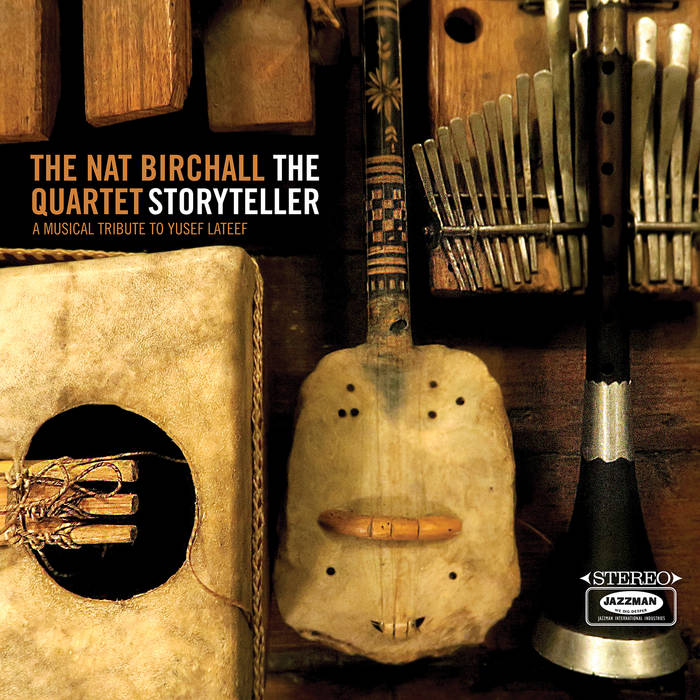 Ex-Friendly Nat can do no wrong right now and this album is near perfection. I can't imagine Lateef not wanting to collaborate if he was satill on this plane. Favorite track: Love Theme from 'Spartacus'.

Robert Middleton This is the 9th album I own by Nat. And, as usual, it is wonderful. The choice to do a tribute to Yusef Lateef was inspired.

Andrew Jervis Nat is just flying at the moment. From deep dub and tributes to Yusef - and it's all amazing.

With 20 years passing since his first foray into recorded jazz, Nat Birchall now ranks as one of the premier saxophonists of his generation. With several highly acclaimed albums in the locker, he now returns with his most ambitious project yet – a tribute to the legend that is Yusef Lateef.

“When Jazzman Gerald first mentioned to me the idea of doing an album as a tribute to the jazz giant Dr Yusef A. Lateef, my first thought was "Where on earth do I start?" Lateef was such a colossus of music, and his scope so broad, that I couldn't hope to begin to cover his musical universe. He was a master of the tenor saxophone, a master of the flute, a master ballad player, a master blues player. Not to mention his skills as a composer and arranger and of course his exploration and use of musical methodology and instruments from all over the world.“

“I’ve always been a great admirer of Lateef, and the challenge was intriguing, so I decided to give it go. We interpreted some of his own compositions (Brother John, Morning & Ching Miau) as well as some compositions by others that he made his own by careful arrangement and interpretation (Love Theme from Spartacus, Ringo Oiwake). I also wrote some original songs that, while certainly not written in his style, might be said to fall into his very broad approach to music making.”

“I also wanted to utilise as many different instruments as possible, something I hadn't explored too much until this album. So it was a nice opportunity to finally get around to playing some of the many small instruments I've collected over the years; the Turkish zurna, the mbira from Zimbabwe, the balaphon from Mali and the arghul from Egypt. We have also tried to use varied time signatures in the music, so we have songs in 3/4, 5/4 and 7/4 time, as well as the standard 4/4.”

“Ultimately the best music tells a story to the listener and takes them to places they might not have imagined themselves. Yusef Lateef certainly did that, and as such was a master storyteller.”

Bandcamp Daily  your guide to the world of Bandcamp

Serena Cherry debuts her black metal project, plus a Pick from the Crypt block from Svalbard